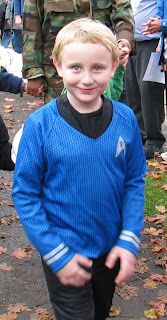 In the early days of my parent trip, back when there were two kids, not three, I made Halloween costumes for the kids. There is a huge box of them upstairs as proof of my perhaps manic devotion to this practice, which often took two weeks, many bags of mini-Butterfingers and a whole lot of babysitting-by-PBS to accomplish.

Actually, I did some of that after kid #3, though he himself was happy with cast-offs from his elder siblings before this year. After all, there were so many choices in the costume box: guinea pig, Pokemon, karate kid, Harry Potter, mouse, dinosaur, the seal costume he wore 24/7 when he was three. One goal that keeps slipping off the ever-evolving to-do list is to untangle the jumble and put them in plastic tubs to protect them from the mice who might invade during the frozen days of winter (I saw one, blast him), but alas, it goes undone.

But the costumes are done this year. In two clicks of a keyboard (maybe an underestimate, but Amazon is easy) costumes were winging their way to our teenage daughter and six year-old son and arrived on time to be worn to school and tonight as they besiege the neighborhood for candy.
And not one bag of Butterfingers has been consumed, or PBS employed.

In fact, considering the price of fabric on some of those overly elaborate creations of mine, these pre-fab costumes were cheap, and our daughter's top and pants will come in handy for other, non-holiday occasions, even if they are eye-popping, as are many teenage garments these days.

Our son decided to be Spock. Kind of last minute. But I was proud of him for forging his own idea of what to be. He'd had "Link" from The Legend of Zelda urged upon him, and a borrowed costume was coming our way, when he changed his mind. He thought Spock was cooler.

I have to agree.

By the time the costume arrived, with Amazon's free 2-business day shipping, he'd learned how to hold his fingers in the correct posture and say, "Live Long and Prosper."

And our daughter looked devastatingly hot in her outfit, even if she was as modestly attired as usual in terms of flesh covered. Texture matters. She was happy.

So it is Halloween morning and no costumes were made in this household except for the one gathered by our oldest son for his Post-Apocalyptic Survivor guise: breathing mask with dual filters, German goggles, my leather motorcycle jacket from 1984. With his long hair in a pony tail, he looked pretty awesome, too.

I'm liking this Internet stuff. From six year-old to Spock in two day's time. Gotta love it.
Posted by BerengariaD at 7:10 AM