The Puppy So Far

A friend of ours once said she'd rather have ten babies than one puppy. They were that much trouble. Then again, that same friend added a puppy to her house last Christmas, so maybe she was exaggerating.

But puppies are difficult. They need to go outside at all hours, chew on the furniture, bark when you want it quiet, chase young children with sharp puppy teeth, and need constant supervision to avoid EXPENSIVE MISTAKES.

Our last puppy, now a nine year-old 94 lb Labrador, was a breeze to housebreak--never had an accident. Then again, when he arrived at eight weeks old, he was over 20 lbs and had a big bladder. He did, however, chew the heck out of a chair, gnaw on the children, swallow a bath mat, chew up his collar (spitting out the metal parts), and needed to be supervised at all times because he was full of EXPENSIVE MISTAKES. Marley & Me could have been written about him, except Marley liked other dogs, and ours considers them security threats that must be neutralized. He's hell to walk.

The new puppy arrived about two weeks ago at eleven weeks, at maybe 5 lbs, and has had many accidents. Her accidents are hard to get too worked up over, because we spill that much on the floor on an hourly basis, but we're still hard at work to eliminate the in-house elimination, and she's making splendid progress for a small white dog with a minuscule bladder. When she chews, it is equally hard to get excited about, our two sons chew more than she does, and have sharper teeth. Her greatest swallowing feat so far are some rabbit droppings she found in the yard. I am sure she is full of EXPENSIVE MISTAKES, but she hasn't learned how to access credit cards or jewelry yet. Give her time.

The biggest concerns about the puppy were a) she'd freak out our five year-old, and b) our other dog would eat her for breakfast. The former is occasionally an issue, but he can just jump on a chair or leave the room if he needs a break. She can't reach very high, though her barks are earsplittingly shrill. The latter has also not surfaced. He is the "top dog" and she adores him. Phew. He tolerates her attempts to capture his tail. He allows her to lap from his water dish. He steals her chew toys whenever he can get away with it. He even tries to play with her sometimes, though one swipe of his paw and she's curtains. Luckily, she's smart enough to get out of the way.

As puppy transitions go, this one is pretty good so far. She's low-impact, if high-maintenance, and our daughter is doing most of the maintenance--it's her puppy. There are troublesome days to come, as she goes through puppy adolescence and begs for a driver's license, but I won't worry about that now. She's too cute, and much easier than ten babies. 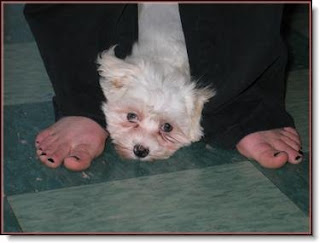 Posted by BerengariaD at 5:56 AM

We have a puppy?