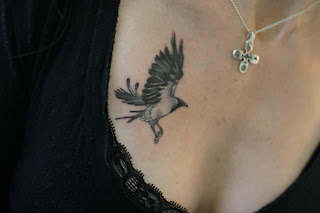 A week ago this morning I got a call from my favorite tattoo artist, Alice, that she had a sudden opening in her schedule due to a cancellation. Would I like to come in? Sure, I thought, why not? So we set it up for 11:30, right after I’d drop my first grader back to school, because he was going for his regular check-in with his autism specialist.

Who diagnosed him with Tourette’s that morning. Because we really needed another neurological diagnosis right about then.

Wait, I take back the sarcasm. She’s an excellent PMHNP and couldn’t exactly ignore the three sets of tics rolling through his body (one verbal, two non-verbal), while he was trying to explain the intricacies of Pokemon. It’s been discussed before, Tourette’s, she just felt like there was no more denying it. Now it’s up to us whether it warrants another medication, or is something he’s coping with okay. And that decision doesn’t have to be made now. The tics will come and go, and if they become unbearable, then we can try something new.

So despite Tourette’s being no big deal once I’d read up on it, my first reaction to another neurological diagnosis in a kid already loaded down with a few, is “Oh god.” Which made a couple hours of torture seem like a great distraction right then.

Okay, I don’t find tattooing torture. As the tattooed biker chick on Fringe said (just before she was offed by the serial killer known as The Artist), “It’s a good pain.” The one on my ankle smarted a lot, and there’s a spot on my wrist that was pretty unbearable, but otherwise, it’s not so bad and well worth it.

Plus, my tattoo was coming months before I expected it. I’d made an appointment with Alice at Infinity Tattoo on Monday, and the only opening was in July, so I took that, and asked to be put on a waiting list in case of a cancellation. Three days later, lucky me!

It only took about an hour. All my tattoos are fairly small, very symbolic, and in places easily seen. I don’t have to pull down my pants to flash my ink, though this one takes a pretty low neckline for full exposure. I will have to explain it sometimes, because Scottish Hooded Crows are common in the British Islands and parts of Europe, but not in the Americas. Alice knew about them because they appear in Celtic mythology, and birders may recognize the species.

Our three kids were quite blasé about the whole thing. I left a sticky note on the counter that read “D & A, gone to get a new tattoo, love B-B”. That was fun. Our older son asked to see it when he got home, responding with “cool,” and his girlfriend checked it out (she knew a Scottish Hood Crow by sight!) and heard the story of the note, responding, “There’d never be a note like that in my house!” Our daughter liked it and has plans for her own when she turns eighteen.

Always unpredictable, our first grader hardly noticed the window of plastic over my right breast, but took great care not to touch me in that area for the last week, knowing it was tender. He also managed to be safe around my tummy for the whole six weeks it took to recover from my abdominal surgery in November, which was amazing. He loves his family.

The tattoo is almost fully healed. I love it. And can’t wait for February, March, and April to fly by, so that it becomes possible to expose enough skin for someone to see it without freezing; like many of my fellow Portlanders, I’m tired of wearing two layers of fleece around the house and keeping a space heater under my desk.

Until summer I can share it with my wife. And if I really want to show someone, I can always unzip my fleece a little and say, “Hey, wanna see my tattoo?” Which when you’re a forty-five year-old mother of three can surprise people. Then again, they might surprise me by showing me theirs.
PS My wife took the photo, she thought the cleavage was needed for context.
Posted by BerengariaD at 11:06 AM