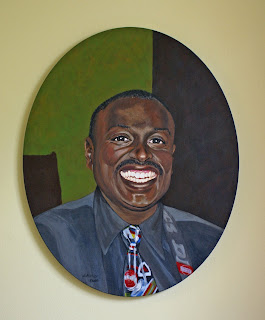 Portrait of an Amazing Man

As a "dog painter" I have few pretensions about my status as an artist. In fact, my artistic life has been punctuated by people telling me I wasn't an artist with a capital "A"; when I considered applying to an MFA program at the University of Washington two decades ago, one professor of painting looked at my portfolio and said, "This isn't art, it's illustration" and another suggested I go into "arts administration" to sublimate any artistic desires I might foolishly have.

OK. So my secret ambition of doing mutual portraits with Annie Leibovitz is unlikely to be realized, but I still harbor other artistic ambitions and Beliefs (with a captial "B") deep in my pedestrian soul.

I am a portrait painter by choice, by desire, by divine intervention if hyperbole must be employed to emphasize the point. Portrait painters don't just make art that "looks like someone" (whether dog, human or horse), not if they are a portrait painter with a capital "P". A portrait should feel like the subject, tell about the subject, capture if possible (and this is my own ambition as a portrait artist) the individuality of the subject--what makes that subject unique.

Thus my dog portraits aren't just pretty paintings of dogs in well-balanced compositions (though I strive to create a spacial placement that works), they are, I hope, individual dogs with pasts, futures and feelings. What many people don't know is that it is a love affair of sorts to paint a portrait; for me, I must fall in love with the subject to give him or her the acute attention necessary to capture that essence.

So I fell in love with Mr. Harvard a little when I decided to paint a portrait of him to donate to the Artists for Alameda Exhibit and Auction a year ago. Dogs I fall in love with easily--I've only painted one portrait of a dog who didn't capture my heart, at least for a time, and I could portray him knowing that his mommy loved him very much. People are different. I don't have to paint anyone I don't care to, and have little time to indulge my artistic ambitions, but when my spouse took photos of Bernard Harvard's band and showed them to me, I knew that I had to paint him.

It wasn't simply that he was a beautiful man with an unusual cranium, skin that challenged my palette and a smile that could light up a city, it was the spark of life that radiated out of him. I knew, from my regular encounters with him at Alameda Elementary, where he was Assistant Principal at the time, that the photo was an accurate rendition of him--he was every bit as radiant, alive, and full of energy as the photo she took.

A portrait takes me at least thirty hours, probably forty or more for Mr. Harvard's, so we spent a lot of time together. My younger son, who was three then, would come in and look at the latest stage of Mr. Harvard's portrait, and wanted to babble to him about it when they met, so I steered them clear of each other until it was done--it was a surprise to Mr. Harvard that I was donating it to the Exhibit and Auction.

Bringing it in when finished, I was nervous as heck about what he would think. No one thinks they look like a portrait of them. We hardly think we look like the photographs that record us literally, pixel by pixel or etched on film. But he responded with a shocked and happy smile, a blush and amazement that I had thought him worthy of portrayal. "Of course you are," I told him, "you're a beautiful man, I had to paint you."

Bernard Harvard died Saturday, July 21st, after routine knee surgery, reminding us that no surgery is ever routine and that life is an ephemeral gift. He was 41 and healthy and married with a five-year-old son just months older than our own young son. What a loss to the world. He was a musician, the Principal of da Vinci Arts Middle School, and we looked forward to decades of him brightening the lives of others.
Posted by BerengariaD at 7:02 AM

I always loved that picture...you captured him perfectly.

Thank you so much for the beautiful words and painting. We loved it. All of us Bernard, Gabriel,his mom and myself his wife Wendy. Bernard was out of his mind excited to tell me about it and could not wait to tell me. He took me to school and surprised me. How incredable it is to know so many people loved and still love my beautiful husband. I understand why you fell in love (just alittle as you said). Much thanks and appreciation. wendy Harvard

I have to say after growing up with Bernard and having him as a best friend all through childhood. I was shocked at his passing. I miss him tremendously and wish his family well. If ever there is anything I can do...sfxwolf@yahoo.com