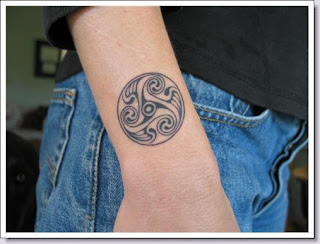 (The last chapter in The Brides of March: Memoir of a Same-Sex Marriage--but tune in for the epilogue in the next few days, because it is time for one, I think, in light of recent events)
No More Mrs. Nice Gay

Her name was Alice, a Generation X razor-cut blonde with her Wonderland namesake illustrated over her upper arm, and she was holding my wrist down with an iron grip surprising in a person so petite and fragile appearing. But then again, it was her job to restrain the body part in question so that the ink didn’t stray off course, creating a tattoo no one would be happy with, and wouldn’t enhance my body or her reputation. Besides, she was a mom, and motherhood isn’t for wimps.

Laurie was there to metaphorically hold my hand; physically, she was sitting in a chair nearby working on her laptop, updating the business cards she’d designed for me (one for my writing, one for my painting), and then working on a project for her graphic design business. As a single mother, she’s developed the ability to work anywhere, anytime, even in a tattoo parlor. She looked up from the computer screen long enough to give her approval to the tattoo design, discuss placement, and take a few pictures of the process, so that Jannine and the kids could see what it looked like getting inked.

Jannine was on a business trip for the day, or I might have had some real hand holding, though compared to childbirth, tattooing is a tickle.

No one but me, and Alice, knew what I’d be getting that day, a Celtic triple spiral that serves double symbolic duty, representing both our three kids and the three stages of womanhood: maiden/mother/crone. I’d been waffling about getting another tattoo for almost twenty years, the patterns of hieroglyphics on my under wrists relics of my early twenties and not regretted. I’d wanted three new tattoos, one in honor of each child (two suns and an earth?), and visited a tattoo place in the neighborhood to ask about help designing what I had in mind, only to be referred elsewhere by the artist, a long-haired hipster in his early thirties who had been interested in helping me on previous visits to his establishment. Since then, I’d cut my long, wavy, positively pre-Raphaelite hair short. He was no longer interested in being of assistance.

Coincidence? I think not.

Guys liked the hair. Aging hippies tried to pick me up in pet stores with my wife standing by. I got great service at the gas station, despite being middle-aged. Waiters brought me extra bread. But lesbians looked right through me.

I didn’t cut my hair to spite the guys or attract the girls, I cut it mostly for Jannine, who likes it short, and because I was tired of being invisible as a lesbian. Maybe that’s why I was getting the tattoo, pulling out my Doc Marten’s, and wearing my retro reading glasses. Jannine joked that I was doing a total makeover and she’d be given the boot next.

As if she could get rid of me that easily!

It wasn’t just that I was in serious need of a make-over, or that I’d had a bad hair summer, or that nobody’s gaydar was going to find me in a million years, all of which partially applied.

Mostly, I was tired of being Mrs. Nice Gay, that sweet, unthreatening lesbian with the long hair, nice kids, white minivan, and too much lipstick.

It was while we were in Canada that I realized just how angry I was. I’d felt hurt, sad, disbelieving, and numb, but hadn’t noticed the anger because I am uncomfortable with rage. In Canada, it became unavoidably evident why I was so angry: we were in a nation that rushed us to equal status, not based on our income, our merits, or how pretty we are, but on the basis that it was the right thing to do. The Prime Minister of Canada made a speech stating that Canada was a nation made up of minorities, gays and lesbians among them, and the rights of one needed to be the rights of all.

While we were enjoying the last of Jannine’s sabbatical at Chris and Lisa’s mountain cabin, the possibility of civil unions in Oregon died as well, at least for the next couple of years. Basic Rights Oregon had been campaigning for a bill that would pass anti-discrimination laws and civil unions for same-sex couples, and despite early indications that the bill would fail, they had managed to get the votes necessary to pass! But in what Basic Rights Oregon called the “Midday Massacre” of the bill, SB1000, Speaker of the House Karen Minnis threw out a 140 year-old rule that allowed legislators to extract a bill from committee and bring it to a vote. SB1000 never got the chance to pass.

Minnis’s claim that legislators would be going against the will of the people by passing SB1000 doesn’t hold water, since the majority of voters polled supported civil unions, even if they opposed same-sex marriage. The elected officials couldn’t represent their constituencies and vote on civil unions.

How can our desire for legal representation be so threatening?

If we are a democracy, and not a meritocracy (or a beauty contest), my looking like a soccer mom in a lame attempt to get “a place at the table” isn’t going to work any more than being exceptional has worked for the dozens of highly paid professional gays and lesbians who have been the poster people for gay rights over the last decade. Our lesbian friends (who include professors, 911 operators, a Vice President of Information Technology, midwives, therapists, and computer geeks), and even famous lesbian (Melissa Etheridge, Ellen DeGeneres, Martina Navratilova, and Mary Cheney) don’t have legal parity any more than the blue collar bull dyke down the block working at Home Depot, a lumber mill, or pulling lattes late into the night, because we, as a class, are deemed unworthy of marriage.

I figure, why expend any more energy on not being me, when being “not me” didn’t get me (or us) anywhere?

Not that I would ever be a clone of the bull dyke down the block (bless her hard-working heart), or regret the pre-Raphaelite hair (the jury is still out, I may grow it back), but the people who matter are broad enough to embrace a tattooed mama in horn rims, just as they could embrace a long-haired mom in Gortex. The mothers and fathers from Alameda School, the cousins from Eastern Washington, and the friends who gathered for our wedding reception and dropped off flowers, don’t care what I look like. It was me who was editing, desperate to change the world by making myself palatable, an ambassador for the “everyday gay” to further the cause of legal marriage.

Jannine and I didn’t expect our unprecedented joy to become the greatest sorrow our marriage has known. Jannine has yet to recover from the election results, the majority finding us unfit to marry still throwing her off her stride (is there a prescription drug that makes it more tolerable to be voted less than deserving of a legal union?), though she’s begun taking photographs of objects other than angry bumper stickers, which is a good sign. The dull ache of depression that spread like a cancer through me over the last year (medication did help me drive, and did wonders with my anxiety over the holidays) was unexpressed anger at the insult hurled at us, undeserved.

Some have asked, “Why does it hurt so much to lose something you never had before, anyway?”

I can only say that our reaction seems to be universal. The couples we know who married on that rainy Wednesday, and in the brief legal window following, were devastated by the loss of their marriages, even though those partnerships, their non-legal marriages, had existed for many years. Lisa says she thinks the pain is because we dared to believe, we let ourselves take the leap of faith that our community would stand by us, uphold our legal equity, and let the marriages stand. Certainly there were bold statements made by straight friends and family that the state could not undo what it had already done, that once the licenses were granted, what could anyone do?

That our marriages would be annulled, against our will, didn’t even occur to them.

Not that we are totally without a sense of humor about the situation. Jannine and I recently tried to watch a grown-up movie instead of The Incredibles (for the thousandth time), or Scooby Doo and the Alien Invaders (for the five hundredth time), and got The Laws of Attraction. As Jannine slipped in the DVD, I said, “Is this another movie about heterosexuals abusing the right to marry?”

She looked at the cover. “Yeah, it’s going to really piss us off, isn’t it?”

We, Chris and Lisa, Marty and Terri, Jannine and I, three sets of brides who camped out to marry, will never say it was wrong to marry March 3rd. Those who bemoaned the quick action are probably still watching their televisions, patting themselves on the back for predicting that bad things would come of it. But since then California, Connecticut, and New Jersey have come closer to same-sex equality, catching the ideological wave sweeping the nation, demanding we be treated like people, not perverts. The tide of change may have receded in Oregon, but we were part of it, and don’t regret it. I’ve had my wedding, and it was perfect, and can never be taken away.

My “No More Mrs. Nice Gay” mood coincides with our last year as Alameda moms, and both of us turning forty-one. One could suggest I’m in a second adolescence, perimenopausal, or inadequately medicated, but it merely means that I won’t be candy coating my arguments, covering my soap box with embroidered appliqué, or aiming for unthreatening in the wardrobe department. My minivan is covered with political bumper stickers and my rainbow flag is flying.
Beware this Bride of March, I’m a tattooed lesbian wife and mother, make way.
Posted by BerengariaD at 5:57 AM