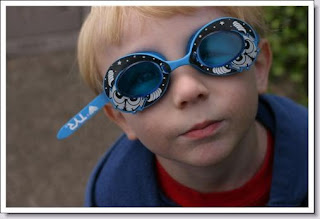 I Pay My Six Year-old Son To Cut His Hair

No, wait, that doesn't sound right. I pay him so I can cut his hair. Twenty-five cents a snip. His haircuts generally come out under six dollars, so I think I'm getting a bargain, and he actually gets a haircut.

The proximity involved in getting a haircut began to be a problem for him around two. Along with many other symptoms of his place on the autism spectrum, an aversion to touch and certain noises came along and grew as he did. Getting his hair cut the first time was a breeze. We took photos. He got a balloon. Second time, so good. Third time, he wouldn't get near the chair and he won the fight. Let's not even discuss the successive efforts.

We let his hair grow for a long time. I like boys with long hair, don't mind a shaggy look, and it gave us time to evaluate the situation. Around four my wife bought a hair clipper set and decided she could just give him a buzz every six months (I voted for annually), and she showed incredible patience while they worked around the noise and touch for around two hours in the bathroom to arrive at a haircut without tears or blood.

Sometimes there were awkward stages, so I was determined to find a way to trim. About a year ago, after offering candy, movies and other incentives and distractions I tried money. Would it be worth it for him to endure the discomfort of the haircut experience for some cold hard cash that could be turned into durable goods? Surprisingly, it was. They aren't the best trims, but they'll do.

His own trim a week ago, when his bangs were bothering him and he grabbed some scissors at school and had at them, was not as smooth. His easily four-inch bangs were shorn across a couple inches of his forehead. His teacher grimaced apologetically when I picked him up from school. Not, probably, because he cut his own hair, but because he'd gotten hold of a pair of scissors unsupervised long enough to do the damage.

He was pretty proud of the results. Bang problem solved, as far as he was concerned. I told him I'd "clean it up a little" later. Today was later. In the parking lot of the Portland Public School building (while big bro' was taking a test), he played his DS and we counted the snips. I'd gotten a roll of quarters in advance but forgot a comb. I did the best I could. He came away richer and his bangs are all one length, if the total effect is a bit monkish.

But when we got home I had a thought: hair wax. Inviting him into the bathroom with me I asked if he'd like his hair spiked. He was intrigued. I showed him the bottle. He agreed to try it. The results were awesome and hair-raising, and he told me now he knew what it felt like to be a man and it was great. He looked pretty good. Hair wax covers a multitude of sins, and snips. He's going to get spiked before school tomorrow. His teacher will get a kick out of it, right before she hides the scissors.
Posted by BerengariaD at 5:33 PM